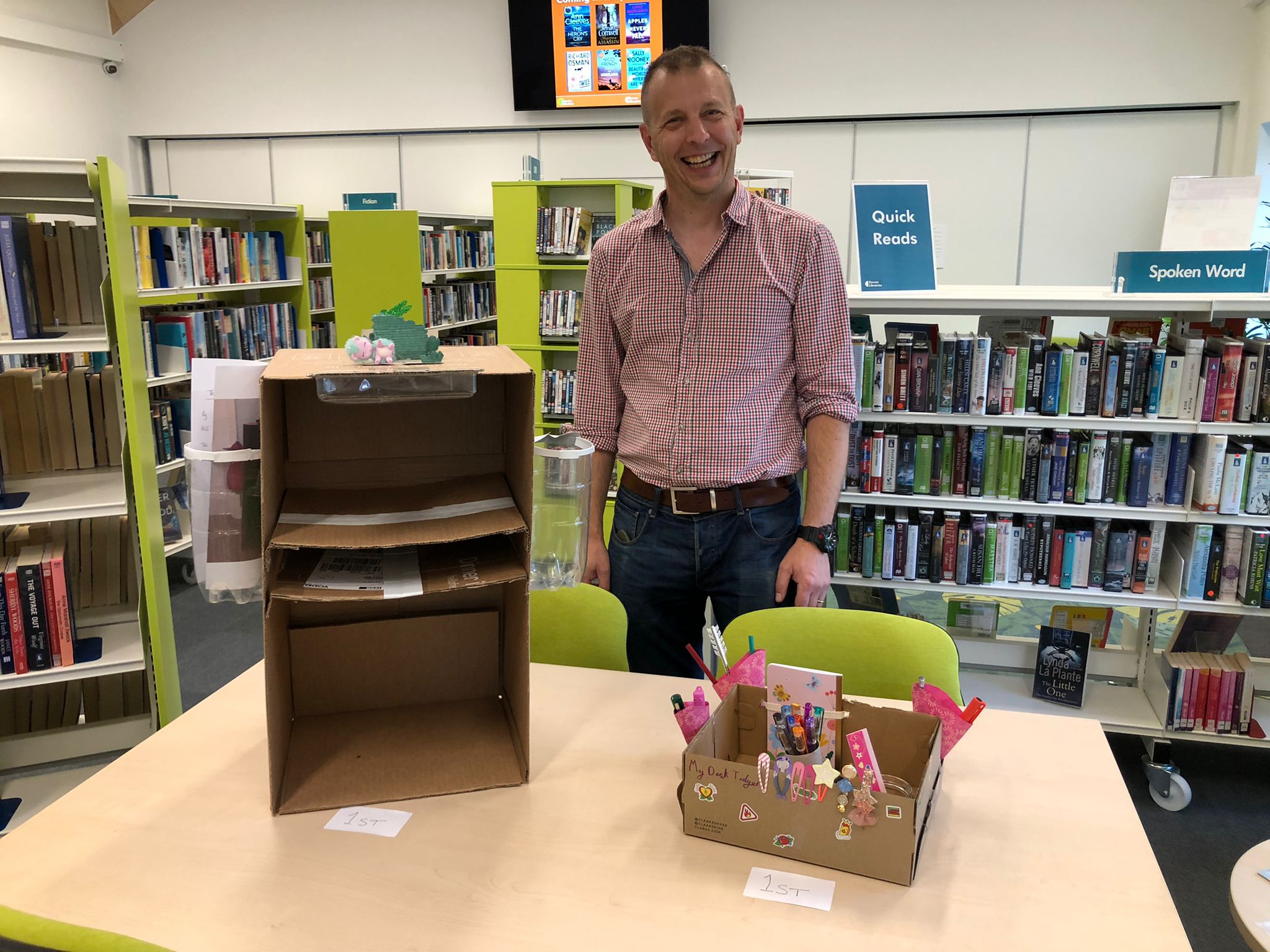 Make Something Useful Out Of Rubbish

It’s been competition time at Bovey Tracey’s new library. With the support of the town’s zero waste refill shop, Bovey Larder, children were asked to make something useful from their household rubbish.

Local children used their imagination and general rubbish from home, which would otherwise have been thrown away or recycled, to build some fantastic projects.

At the end of the Summer holiday, the entries were displayed in the library, then judged by Bovey Larder, whose owners donated prizes for each age category. Eight entries across the two age categories were received and the youngest entrant was only three years old!

The ‘Seven and Under’ prize was awarded to Eimyria for her ‘Rubbish Bookshelf’ and the ‘Over Sevens’ prize went to Martha for her superb ‘Desk Tidy’.

Commenting on Eimyria’s ‘Rubbish Bookshelf’ Corin Burton, owner of Bovey Larder said: “I love that there were lots of ideas in one project and Eimyria has put a lot of work had in to build a practical model and the biggest entry we had. Plus, as we have a lot of cardboard waste in the shop, it’s inspiring to think of how we might re-use it to make other things.” He also noted, “Martha’s desk tidy is immediately useful; I can see her getting a lot of use from it. And, of course, stationary always needs organising.”

Corin added: “we also had to give a special mention to Ed and Tom for their Womble Bin Lorry – we, and our shop-resident Womble, absolutely loved it. It was a brilliant idea and took a great deal of work – especially the flip top lid with the separate recycling compartments inside.”

Gemma Pegg, who manages the library and ran the competition concluded, “All of the entries were fantastic. We’re very proud of all our young readers and the thoughtfulness and effort they put into their projects. As well as the winning entries, it was brilliant to see children use bottles and cartons to make plant pots and bird houses and feeders, some of which were beautifully decorated. We could all take on board these simple ideas. Perhaps we could make bat boxes or bug homes for our gardens as well.”

All of the entries are currently on display in the window of Bovey Larder at 41 Fore Street.

Back
We use cookies on our website to give you the most relevant experience by remembering your preferences and repeat visits. By clicking “Accept All”, you consent to the use of ALL the cookies. However, you may visit "Cookie Settings" to provide a controlled consent.
SettingsAccept AllReject All
Manage consent

This website uses cookies to improve your experience while you navigate through the website. Out of these, the cookies that are categorized as necessary are stored on your browser as they are essential for the working of basic functionalities of the website. We also use third-party cookies that help us analyze and understand how you use this website. These cookies will be stored in your browser only with your consent. You also have the option to opt-out of these cookies. But opting out of some of these cookies may affect your browsing experience.
Necessary Always Enabled
Necessary cookies are absolutely essential for the website to function properly. These cookies ensure basic functionalities and security features of the website, anonymously.
Functional
Functional cookies help to perform certain functionalities like sharing the content of the website on social media platforms, collect feedbacks, and other third-party features.
Performance
Performance cookies are used to understand and analyze the key performance indexes of the website which helps in delivering a better user experience for the visitors.
Analytics
Analytical cookies are used to understand how visitors interact with the website. These cookies help provide information on metrics the number of visitors, bounce rate, traffic source, etc.
Advertisement
Advertisement cookies are used to provide visitors with relevant ads and marketing campaigns. These cookies track visitors across websites and collect information to provide customized ads.
Others
Other uncategorized cookies are those that are being analyzed and have not been classified into a category as yet.
SAVE & ACCEPT